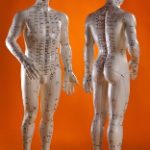 Tapping, or EFT, is a wonderful and fast clearing tool. It is an easy way to clear limiting beliefs, fears, doubts, anxiety, pain, and cravings as well as installing new and positive thoughts and beliefs.

You can tap with one hand (either one), or both.

The Karate Chop Point is on the outside of the hand. You can tap on this point with four fingers on the other 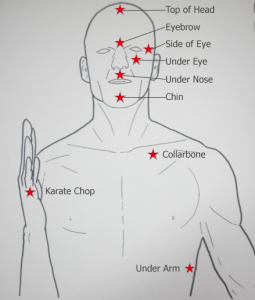 hand…or tap both hands together on the Karate Points on both hands.

The Eyebrow Point is on the bone above the eye, on the eyebrow close to your nose….use two fingers….again, and this can be either side of your face, or both sides at once.

The Side of the Eye Point in on the bone of the eye socket, on the side of the eye. It is best to tap with two fingers, lightly…..either side or both sides at the same time.

The Under the Eye Point is on the top of the cheekbone, under the eye socket. Again, tap with two fingers, on either side of your face, or both sides at the same time.

The Under Nose Point is between the bottom of your nose and your top lip. You can use one finger, or two, on either hand.

The Chin Point is in the center of the chin between your lower lip and the bottom of your chin.

The Collarbone Point is just below the hard ridge of your collarbone….you can tap on either side, or both at the same time.

The Under Arm Point is about four inches under your armpit….again, either side if good.

The best way to learn about tapping is to experience it. So….let’s get started.

First, decide on what you want to clear. You can pick a memory of something that is still causing you emotional pain. You can pick a craving, a fear, a doubt, a pain that you have right now. Just pick one for now.

Next, rate it on its intensity. Let’s say you are craving chocolate. On a scale of 1 – 10, if you could easily not eat chocolate give it a 1. If you think that you have to have chocolate or you are going to go crazy (for example) give it a 10. Try to pick an issue that has some intensity so you can tell the difference.

To keep this instruction simple, I am going to call the thing that you want to clear an “Issue”. You can tap with either hand, it doesn’t matter….on either side of the body.

Now, begin with a set-up phrase while tapping the Karate chop point and saying something like: “Even though I have this “Issue”, I completely respect myself. Do this three times.

Then you start tapping on the other points while stating the reminder statement…..tap on each point about 5 to 7 times.  Don’t worry about being really exact about any of this, tapping is really forgiving, and it still works!

Eyebrow Point: Tap on this point and say; “I have this issue”.

Side of the Eye Point: Tap on this point and say something like, “This Issue.”

Under the Eye Point: Tap on the top of your cheekbone under your eye and say again, “This issue.”

Under Arm Point: “This issue.”

Top of Head Point: “This issue.”

Take a deep breath in and out and check in on your issue. How intensely are you feeling it on a scale of 1 to 10? The number should have come down. You can continue to tap saying the reminder phrase until the number is way down to a low number.

Very often, the issue “morphs” a bit into a variation of the original issue Let’s say that you started with being angry about something and after tapping on that issue you realize that you are now feeling frustration, or sadness, etc. Then you would tap on the new issue to clear that out.

*The information presented on this website, including Tapping, is not intended to represent Tapping as a method to diagnose, treat, cure, or prevent any disease or psychological disorder. Tapping is not a substitute for medical or psychological treatment.
you may contact me at Dr.April@aprillouis.com